I have not posted up as many NetGalley reviews as I’ve wanted to, but that’s because I’ve been reading a little bit slower the past couple weeks. I’d still like to have a good reading month and get a good number of reviews up for the #Reviewathon. My review ratio on NetGalley would really appreciate the boost.

As always when it comes to a book I was granted early access to thanks to the publisher and NetGalley, my rating and review is still all my own. I’d already decided to buy this book before I got the ARC. All right, let’s jump into the review. 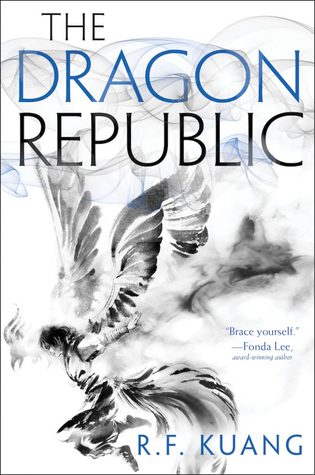 The searing follow-up to 2018’s most celebrated fantasy debut – THE POPPY WAR.

In the aftermath of the Third Poppy War, shaman and warrior Rin is on the run: haunted by the atrocity she committed to end the war, addicted to opium, and hiding from the murderous commands of her vengeful god, the fiery Phoenix. Her only reason for living is to get revenge on the traitorous Empress who sold out Nikan to their enemies.

With no other options, Rin joins forces with the powerful Dragon Warlord, who has a plan to conquer Nikan, unseat the Empress, and create a new Republic. Rin throws herself into his war. After all, making war is all she knows how to do.

But the Empress is a more powerful foe than she appears, and the Dragon Warlord’s motivations are not as democratic as they seem. The more Rin learns, the more she fears her love for Nikan will drive her away from every ally and lead her to rely more and more on the Phoenix’s deadly power. Because there is nothing she won’t sacrifice for her country and her vengeance.

The sequel to R.F. Kuang’s acclaimed debut THE POPPY WAR, THE DRAGON REPUBLIC combines the history of 20th-century China with a gripping world of gods and monsters, to devastating effect.

It actually took me a little while to get through this sequel, and not because it wasn’t good. It was just as intriguing and compelling as the first book, and I think because of that I wanted to savor the book a little longer. Well, that and I was reading it at a particularly busy time, so it made it hard to read for longer than ten minutes here and there for most of it.

There are so many great complexities in this book, especially with the consequences of actions and revelations from the first book. Oh, and then there’s characters who you thought were dead that turned out to not be dead. I’m not mentioning names but that was something I wasn’t expecting, which was pretty cool.

I felt like I got to explore so much more when it came to the world, the religions, the provinces and nations, the history of these wars…it all became just so much more expansive. It was like peeling open layer after layer of new information as the chapters went by.

I was so engrossed by this story, so I’m actually glad that I took time to completely read through this. Maybe it’ll make the wait for the next book not feel so long.

You can buy a copy from Amazon, Barnes & Noble, Books-a-million, Book Depository, or your local independent bookstore.

You can also borrow a copy from your local library.

7 thoughts on “Review: The Dragon Republic by R.F. Kuang”