Well, my work shift started with some not so good news for me. I’ve been lucky enough since the beginning of the year to be working in an isolated job in an office at the factory. That temporary placement will be coming to an end on Friday, which is two weeks earlier than originally predicted. What this means for me is that I’m being bumped out to the general assembly jobs instead. It means working around a bunch of other people, some of whom still believe that this is some wildly ridiculous hoax that is messing with their fun.

It also means that I’m going to try and take advantage of where I am for the next week, and try to write up as many posts as I can so that I’ll only need to add intros to them when I get bumped down to not having such easy access to the internet.

I’m hoping things will be okay, and I’m hoping that I can keep up with my current blog schedule, but if that doesn’t happen, I hope you all understand why. I have so many books to talk about and so many bookish topics to discuss. So I’m hoping to keep doing that, but I might also need to do some extra distancing if things don’t go the greatest on the assembly floor.

Anyway, welcome to the second of my Manga Monday reviews. Last year I started reading a completed series that was completely new to me…and I started it because a voice actress I like voices the main character in the anime. Also, I mostly prefer to read the source material before watching the adaptation. I’ve only read the first four collector’s volumes of the manga, and I am about halfway through the first season of the new release anime. They did an entire anime season like a decade ago, adapting this series, but the show got ahead of the books, so it did it’s own thing. Now, this re-do is focusing on following the manga all the way through, similar to how there is “Fullmetal Alchemist” and then “Fullmetal Alchemist: Brotherhood.”

Okay, let’s jump into the review. 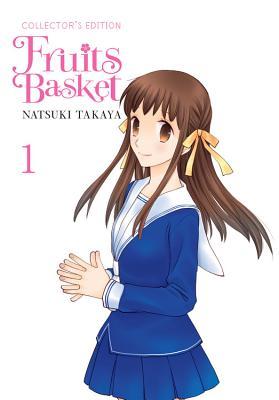 After a family tragedy turns her life upside down, plucky high schooler Tohru Honda takes matters into her own hands and moves out…into a tent! Unfortunately for her, she pitches her new home on private land belonging to the mysterious Sohma clan, and it isn’t long before the owners discover her secret. But, as Tohru quickly finds out when the family offers to take her in, the Sohmas have a secret of their own–when embraced by the opposite sex, they turn into the animals of the Chinese Zodiac!

A perennial favorite of fans and librarians alike, Natsuki Takaya’s beloved bestselling Fruits Basket series returns to print in gorgeous deluxe English-language omnibus editions with beautiful full-color illustrations that are not to be missed!

I don’t read a lot of Shojo Manga, but I do read a few. It’s like my reading style with novels: I mostly read fantasy, but I do like reading a cute contemporary romance when the mood strikes. Likewise with manga, I do read more of the action/adventure/fantasy/sci-fi stories, but occasionally I just want a cute romance focused story, so I turn to Shojo, like Fruits Basket.

Which, okay, this particular series does have a bit of “magic” in it. A number of the main and supporting cast are the newest incarnations of the members of the Chinese Zodiac.

This series is so cute. Tohru is such an easy-going and hard-working girl, and she just tries to be grateful for what she does have in her life, instead of dwelling on what she is lacking. So, when her grandfather decides to have the house renovated and he’ll be staying with family, Tohru decides to live in a tent instead of burdening her friends with an extra person in their homes for that time.

It doesn’t take long before she is found to be camping on Sohma clan lands, and she gets invited to stay in a home with three of the Sohmas, two of which are her classmates.

And it isn’t long before Tohru learns about the zodiac secret either.

This is an easy to read story, with interesting characters, and a cute premise. There’s not a whole lot of action/fighting. This feels a lot more like a slice-of-life story, but I still greatly enjoy reading it. I love seeing Tohru getting closer to Yuki and Kyo, and learning more about them and their lives as members of the zodiac.

We even get to see little flashbacks to Tohru’s childhood with her mother. Yes, there are moments of sadness or slight darkness in this story, but it mostly is hopeful and optimistic, and you can’t help but get attached to Tohru’s positivity.

I am looking forward to picking up the rest of this series. The good thing is that it is a complete series, since it is a bit of an older one. But they also have a few volumes of a spin-off manga out already too, so there’s plenty more story in the Fruits Basket world.

You can grab your own copy of this book from Amazon, Barnes & Noble, Books-a-million, Book Depository, or your local independent bookstore through IndieBound.

You can also check with your local library.