Greetings! We have made it to Thursday, and I have so many blog posts that I’m hoping to write today. I want to have a relaxing weekend of being lazy and reading books, so to make that more likely I want to get a few things checked off my to-do list, like writing the posts for Saturday, Sunday, and Monday…so 5 posts. Hopefully it shouldn’t take too long to get all of those finished.

Anyway, I’m kind of excited to talk about today’s book, especially since I’m reading the sequel this weekend (hopefully). This series overall just has an interesting premise, and I’m excited to see how it all unfolds. Oh, but before I jump into the content of the review, I just want to say that the summary for this book is less a single book summary and more an overall series summary.

Okay, let’s jump into the review. 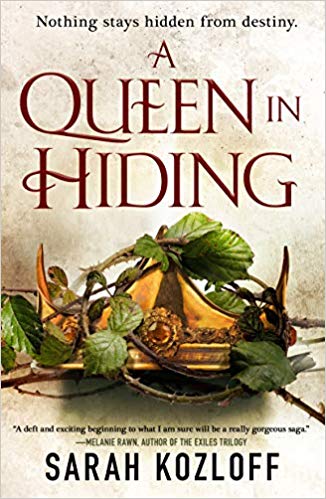 Orphaned, exiled and hunted, Cérulia, Princess of Weirandale, must master the magic that is her birthright, become a ruthless guerilla fighter, and transform into the queen she is destined to be.

But to do it she must win the favor of the spirits who play in mortal affairs, assemble an unlikely group of rebels, and wrest the throne from a corrupt aristocracy whose rot has spread throughout her kingdom.

So, a very fascinating element to this entire four-book series is that unlike most book series, we don’t really have to wait long in between books. This first book was released in January, book two came out in February, book three is coming in March, and the concluding novel will be out in April. That’s right, this series is pretty much perfect for binge-readers. And honestly, I’m curious what people will think about this set up. I mean, okay, I don’t much mind having a year or two to wait in between book releases, because there are so many other books I can read in the meantime, but I’m also very intrigued by the idea of only needing to wait a couple weeks after finishing a book to pick up the next in the series.

When I first decided to check this one out, it had already been released so I opened up the digital sample on the B&N web site, and ended up being able to read something like 50 or 60 pages, and that definitely had me clicking “Add to Cart” and buying it. After receiving my copy in the mail, I think it only took one or two reading sessions to complete this book.

So it reads rather quickly, and I was definitely pulled into the story.

But I admit to being disappointed by the book summary. The very first word in the summary is “Orphaned,” and yet Cerulia’s mom didn’t die until roughly 75% of the way into this book. In fact, we followed the Queen Cressa far more than we did the Princess Cerulia in this first book. I’m not entirely upset by that, because it was a fascinating tale, and following the Queen allowed us to understand the countries and the politics and some of the problems of the world, which we probably wouldn’t have grasped if solely following a 9-16 year old princess.

And we do cover a wide span of years in this book as well, sometimes having a couple years pass in-between chapters. We follow so much political scheming, and possible alliances, definite betrayals, and a whole lot of intrigue in this tale. I really did enjoy reading it.

This book does a marvelous job of introducing the characters we’ll likely be following through the rest of the series, and I think it starts to set off the training and growth of Wren (the name the princess uses while being raised in hiding).

Is it stupid that I only really think of the Princess as Wren, because the name Cerulia just makes me think of Cirilla from The Witcher books? Maybe, but sometimes I just can’t help myself.

All in all, I am so intrigued to see what Wren learns once she meets up with and allies herself with the small band of guerilla fighters and starts working to take back her country and her throne.

You can grab your own copy of this book from Amazon, Barnes & Noble, Books-a-million, Book Depository, or your local independent bookstore through IndieBound.

You can also check with your local library.

1 thought on “Review: A Queen in Hiding by Sarah Kozloff”