Happy Monday! Before I get into the actual review portion of this post, I’ll start off by saying thank you to those of you who entered my 500 follower giveaway. It is over now, and the winner was Samantha Duffy. So congratulations to Samantha, and message me to let me know which prize option you would like. I’ll probably run another giveaway at some point in the future, but maybe not until I reach 1,000 followers.

Okay, so welcome back to another Manga Monday post. This is also my final post of 2018, so wow, what a year this has been. Thank you to everyone who has joined me in this blog, and I hope to keep posting and improving with all the bookish content in the coming year. Now I’m not going to waste any more time before I jump into the review, so let’s get started. 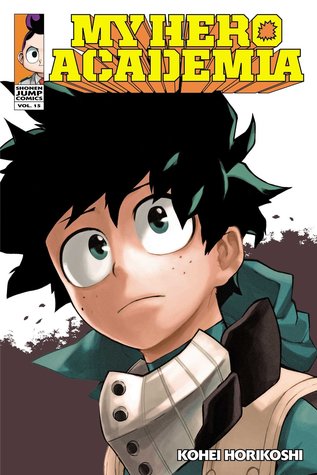 What would the world be like if 80 percent of the population manifested superpowers called “Quirks”? Heroes and villains would be battling it out everywhere! Being a hero would mean learning to use your power, but where would you go to study? The Hero Academy of course! But what would you do if you were one of the 20 percent who were born Quirkless?

A new and sinister enemy appears in the form of Chisaki Kai, the young leader of the Hassaikai yakuza gang. Looking to fill the power vacuum left by All For One, Chisaki makes contact with the League of Villains to gain possible support. When a chance run-in with a scared little girl brings Midoriya and his mentor Mirio face-to-face with Chisaki, none of them have any idea how much their lives are about to change…

This was an interesting volume. I enjoyed following a few different students out on their work study internships, especially when it became clear that they were all working on smaller parts of a larger job that brought all of them together into a big collaboration of various hero agencies. It is always really cool when you bounce around to what seems like different, mostly unrelated stories, and then the more you read into it, the more you see all the threads knitting together to create a more epic tale.

Plus, seeing the characters go out on their work study assignments helps with seeing just how far everyone has come since the beginning of all of this. Honestly, everyone has grown so much, been through a heck of a lot of situations and fights, and they have all learned so much.

Actually, is it really bad that right now I’d like to see more story following Bakugo and Todoroki, since they are the ones that didn’t get their provisional licenses? Hopefully that volume will come soon enough.

It’s also really cool to see the development of the relationship that Sensei Aizawa/Eraser Head has with Midoriya/Deku. I like that he knows just how far Midoriya will go to help and save people, and that he is starting to figure out when he needs to hold Midoriya back and when he can let him try more. I actually really like Eraser Head as a character, and would totally be cool with a one volume prequel following Eraser Head in either his school days or his early hero days.

I’m curious to see what will happen with this as the story progresses.

You can pick up this volume of the series from Amazon, Barnes & Noble, Books-a-million, Book Depository, or your local indie bookstore.