I’m sure by now most of you know that I love 24 hour readathons. I feel like they are usually so productive for me, so I look forward to them whenever I find out about them. Well, now is that time, because Zoe Herdt (readbyzoe on YouTube) just announced her next readathon date, and as it turns out, I’m actually going to be available to read.

It turns out that my fiance is going to go hang out with his buddies on Saturday, so that leaves me alone at our apartment and I can totally read while he’s gone. Of course that also means that I need to go to the store and get snacks and coffee/tea to keep me fueled for a reading marathon.

Anyway, you can find Zoe’s announcement video about the readathon here.

So this readathon will take place on Saturday March 3rd, from midnight to 11:59, and yes, it is that time for your time zone. Now, I don’t think I’ll be starting to read at midnight, but I’ll still be able to do some pretty good reading by waking up around 6 or 7 am.

The hard part for this is trying to decide what I’m going to read for this event, so I’m just going to choose a few books that I’d like to try reading, and then I’ll read from those books based on my mood during the readathon.

Now, since this is taking place in March, I’ll also say that I’m once again doing Middle Grade March, so I may have a few MG books on the TBR. I don’t know.

Okay, I’m going to pause in writing this and go look at my bookshelves to figure out what I might want to read.

Wow, that took a little longer than I thought it would, but I found eight books that I want to try and read during the readathon. Realistically I know that I’m not going to read all of them, but we’ll see what happens. 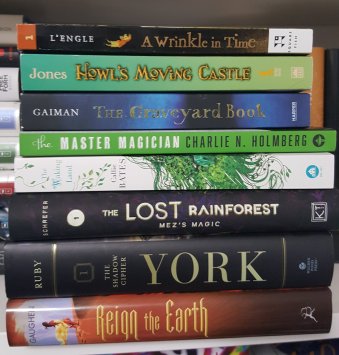 I have a decent blend of books: Middle Grade, Young Adult, and Adult. They are all fantasy, but I’m just kind of in the mood for those right now.

Obviously with the movie coming out, I feel like it is the perfect time to read A Wrinkle in Time. I think I read it when I was much younger so I don’t really remember the book, but the movie trailers look great so I’m going to enjoy reading this.

Speaking of book to movie adaptations, I have never read Howl’s Moving Castle, but I saw the movie in college and I remember it being really interesting. Well, since my fiance and I recently bought a few Studio Ghibli films, including Howl’s, now seems like the time to read it, finally.

I read Stardust during a previous readathon, and I have been wanting to read more Neil Gaiman (aside from the Sandman comics that I absolutely loved), and with The Graveyard Book also being a Middle Grade, it will work for the readathon as well as Middle Grade March.

The Waking Land is a fantasy book I heard about last year in a B&N article about upcoming fantasy releases and it sounded really interesting, but I just now got around to adding it to my library. With the sequel coming out later this year, this will be a good time to read it.

I’m trying to reread the books in the Paper Magician series in anticipation of the upcoming release of the fourth book, so it is time to read the second one, The Master Magician. These are shorter books, so they are perfect for readathons.

I saw The Lost Rainforest in my local grocery store and it sounded so cute that I could not help but pick up a copy.

Now York is a book that came in I believe an OwlCrate Jr box last year, so I saw a bunch of BookTubers talking about it, and the concept just sounded so interesting that I went and bought my own copy.

Finally is new release Reign the Earth and I have been excited about it since I learned about the book last year at BookExpo.

So I do believe that is all for today, and I will definitely have a readathon wrap up.

9 thoughts on “Readathon by Zoe TBR”