So a while back I saw a number of bloggers doing Down the TBR Rabbit Hole posts and working on purging out their TBRs. Those posts had rules like looking through 5-10 books on your TBR and then deciding if you would keep it on the list or say bye to it. Considering that my TBR list was over 800 books at the time, I knew 5-10 books with each post would take me far too long. So I went rather ambitious and decided on 30 books with each post.

My Lady Quicksilver by Bec McMaster. This is the third book in her Steampunk London series, after Kiss of Steel and Heart of Iron. I definitely plan to read this soon. Keep.

Curtsies & Conspiracies by Gail Carriger. I am so behind on Carriger’s books so it will be a while before I can get around to this one. I will be taking it off my list, but the book will stay on my bookshelves, because eventually I do want to read it.

Heavy Metal and Sunroper by Natalie Damschroder. I read and really enjoyed the first book in this series, plus it sort of takes place in Ohio, so I’d like to finish them. Keep.

Of Poseidon by Anna Banks. I’m just not really interested in reading this book now. Goodbye.

A Soul for Vengeance by Crista McHugh. I read the first book in this series and it was all right, and I had intended to continue on because I was trying to read every book by McHugh, but I’m just not really feeling like I want to continue on with this series right now.

Gathering Darkness and Frozen Tides by Morgan Rhodes. Okay, so I plan to reread this series in time for the release of the final book here in a few months (because they pushed the release back to like February now–I’m disappointed because I got a new book in this series each year for Christmas), so obviously keep.

The Forever Song by Julie Kagawa. I need to read this trilogy, and I will. I just need to find a matching set of covers first.

Sky Pirates by Liesl Schwarz. This is the third and final book in The Chronicles of Light and Shadow, and I really enjoyed the first two books. I’d like to be able to add this to my completed series list, so keep.

Summoning the Night, Binding the Shadows, and Banishing the Dark by Jenn Bennett. After I read and enjoyed the first book in this series, I had intended to continue on, but found it rather difficult to find copies of the rest of the series. Then last year I won a Twitter giveaway by the author and actually got a signed set of the series. I’m going to keep book two, Summoning the Night, on my to-read list, but take the others off so I don’t over-clutter the list.

Firelight, Moonglow, and Shadowdance by Kristen Callihan. I have been wanting to get into this series for a long time, and I still want to read it. Keeping the first book only until I know if I want to continue on with the series.

Taste of Darkness by Maria V. Snyder. I need to reread Touch of Power and then finish this trilogy. I love Snyder’s works so this is an easy keep.

Chicken Soup for the Soul: Inspiration for Writers…I’m going to keep this with my writing books, but I’m just not feeling like I need to read it right now, so bye.

Red Hot Fury by Kasey MacKenzie. This book does still sound interesting, but I just don’t know if I’ll be in the mood to read it any time soon. I’ll keep it on my bookshelves, but for now I shall take it off the list.

The Guild: Fawkes by Felicia Day and Wil Wheaton. This is a part of the Guild comics series, but it wasn’t included in the two original bind up releases. I think they recently put it into the new deluxe Guild Library Edition Bind-Up so I’ll finally get to read it.

Promise of Blood by Brian McClellan. He’s an Ohio author, I met him and bought signed hardbacks from him, and the concept of the Powder Mage series intrigues me. I really need to find the time to fit this into my reading schedule. Keep.

Okay, so I managed to get rid of 17 books off my list today (okay technically 20 if you consider that the Morganville bindups are two books in one). I think I’m doing pretty good with my TBR purge.

Oh, and now a library update. I now have all of the bookcases in the library assembled. I just need to get the rest of my books packed up and moved over, and then get everything sorted, but it’s starting to look really nice. Here is another in progress photo update. 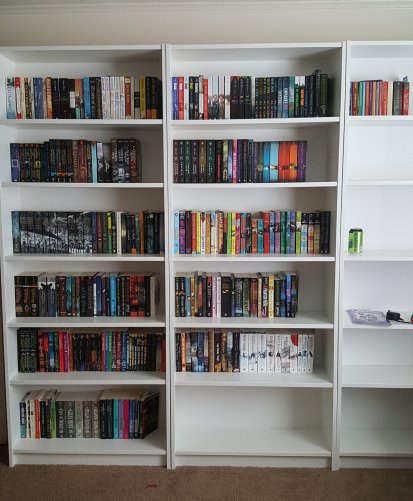