So, I don’t do a lot of mini reviews on here, but I’m making a bit of an exception today. Though I could probably rave and ramble on about both of these intriguing stories, if I did so who knows when I would be able to squeeze them onto this blog. I’m supposed to only be posting 5 days each week, giving myself basically weekends off, but I’ve had a lot of things I’ve wanted to talk about lately, so bonus posts are happening. Anyway, let’s just jump into these reviews. 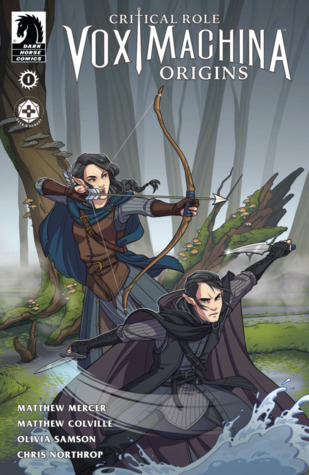 Roguish twins Vax’ildan and Vex’ahlia investigate a curse afflicting the impoverished citizens of the port city of Stilben. Things are not what they seem for the adventurous siblings…between fighting shark-riding fish men and black-clad assassins, they meet an antlered half-elven druid with her own theory about the curse.

In a future just a few years down the road in the wrong direction, a woman’s failure to comply with her patriarchal overlords will result in exile to the meanest penal planet in the galaxy. When the newest crop of fresh femmes arrive, can they work together to stay alive or will hidden agendas, crooked guards, and the deadliest sport on (or off!) Earth take them to their maker?

Here’s a fun fact…there is actually a connection between both of these comics, and it happens to be actress Ashley Johnson. She plays gnome cleric Pike Trickfoot in the web series Critical Role, which I have gushed about on this blog a couple times already, and then when she did an episode of Signal Boost on Geek & Sundry, Ashley recommended Bitch Planet as something to read.

As a huge fan of Critical Role because of the epic storyline (seriously I have watched all 113 episodes of the show and they are typically 3-5 hours long each–so basically I’ve invested a lot of time for this), the announcement of a prequel comic greatly excited me. This was a fantastic story detailing part of an early adventure before Vox Machina truly formed. This particular issue focuses on Vex and Vax, though there is a decent amount of Keyleth in it as well. Go Team Half-Elf. The artwork was great, and it was actually done by a Critter (what we fans of the show call ourselves), so that’s even cooler. Matt Colville manages to capture the personalities and attitudes of the characters so well, and this 27 page comic issue was over too quickly. There will be 6 issues in this original run, with one issue being released each month, so I am eagerly awaiting the next installment.

Moving on to Bitch Planet. First off, please note that this graphic novel is tagged as for mature (age 16+ readers). There is violence and nudity and more within the pages. This one takes place on a prison planet where women who are considered non-compliant are sent. If a woman is too fat, too outspoken, too ugly, etc. etc. she gets sent out to this prison to live and work, and they are not treated well here. But man, the diversity within this graphic novel is outstanding. The variety of sizes and shapes and colors and everything displayed by the group of women we follow is absolutely wonderful. In some ways this feels like a sci-fi version of “Orange is the New Black”…kind of. Add in the politics of something like The Handmaid’s Tale and you’re probably pretty close to what is portrayed within the pages. I am greatly intrigued by this series, and I’m hoping to learn more about the core group of women, because so many of them were introduced in the first few issues that I actually had to reread some parts to make sure I knew who was who. Thankfully I already purchased Vol 2, so I’ll be reading that very soon.