We have reached the final post discussing the first book in the Colorworld series. Wow. I guess this is where I should also point out that I am moderating a panel for Colorworld Live on July 17th with Rachel E Kelly as one of the panelists. It seems like this is the perfect time to be reading this series and talking about these books. Oh, and I was talking to Rachel the other day and I have been given some secret insider information about an upcoming installment for the Waterworld volumes. I won’t say any more about it, but I am super excited to be able to reveal that information…which might happen by the time we get to the Waterworld Volume 4 discussions.

I should also say that if you have any questions about writing, or the Colorworld series specifically, please ask them in the comments. I’m compiling a list of questions for my panelists on July 17th, so we will have plenty to talk about. You can go to this site and pick up signed copies of the books, as well as hangout times with our author panelists. It’s going to be a great time!

So I’m hosting a readalong for the Colorworld book series. This event will actually take us through the rest of 2020, which gives us all something to look forward to. Hopefully we’ll get to finish this readalong by reading Waterworld, Volume 4, which should be coming out at the end of 2020. Then we’ll all get to wait together for Waterworld, Volumes 5 and 6, and then the final book in the series…which I don’t know the name of yet. I know I’m excited to read these books again, this time with other readers, both old and new to the series.

Colorworld is 352 pages long (the original version anyway) with 45 chapters total. There is also an illustrated edition, the e-book, or the audiobook. I do definitely recommend listening to this book if you are someone who enjoys audiobooks. The voice actor cast is absolutely incredible. This first book just features Todd Haberkorn and Cherami Leigh, but they have also added Brittney Karbowski, David Wald, and Chiemeri Osemele.

The readalong for June 1-June 29 will cover Colorworld, the first book of the series. I’ll have the book details below the cover image. And you can find previous week discussion links below as well.

And you can check out my post with the full readalong details here. 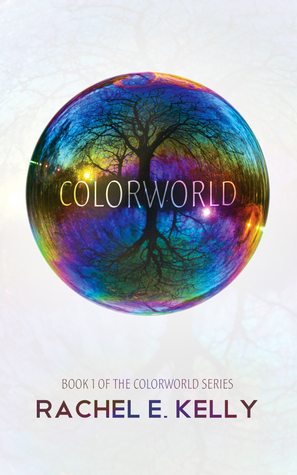 Wen knows what love looks like. Since her mom died over a year ago, she’s seen it every day on her orphaned younger brother’s face. Wen’s made good on her promise to her mom that she’d take care of Ezra, even quitting her carefree party-girl ways to become a hard-working college student so she can provide for him.

Wen knows what love feels like, too. Because when she touches people, she feels what they do. “Uniquely perceptive” is what her mom called it, and Wen’s not going to argue; she doesn’t know any different.

But an energy therapy study changes not only what Wen knows about her unusual gift; it also changes her. Now, instead of feeling emotions, her touch brings death to others. No one is safe around her, especially Ezra.

Wen turns to energy healers for help. And that’s where she meets him: Mr. Tenacious and Audacious, Gabe Dumas. He knows about love, too; he speaks it in ways Wen has never experienced. And he’s never even touched her.

With her heart unraveling, Wen discovers a world only she can see. It may offer hope for her condition… or it may be better left hidden. *Intended for 16 and up

Be warned…the rest of the post (and the comments) are likely to contain a deeper discussion of the story, including potential spoilers.

The plan to break into Louise’s office to look through her files seemed like a pretty good one at the time. Of course, it quickly went off the rails as soon as Wendy agreed to be Louise’s hypno-touch dummy. This sort of combines questions one and two together. Louise is a skilled manipulator, for sure. The way she uses the hypnotism to play on Wendy’s fears as a way to control her makes total sense considering Louise’s goals. Compared to the beginning, Louise still feels very sketchy to me, but now some of the concerns and such have been outright confirmed, so it’s nice to know my suspicions were for a reason. And then with the actual break-in to Louise’s office, we get a whole lot more questions to unravel, which honestly, I kind of like. It really is cool to know that this story is just getting started and there is so much still to be revealed.

I did not see Gabriel turning Wendy over to Louise coming at all. I was pretty much as shocked as Wendy was when it happened. When following standard romance build-up/complication/climax/resolution this happened at the perfect time. But it gave Wendy the time she needed to think through things. This naturally leads to their conversation in separate rooms there at the pool house, which brings the two back together. It’s a twisty and bumpy conversation at first, but I think it does end up bringing our main couple back together in a stronger way.

Of course the end of that question leads directly into the proposal. Yes, they’ve only known each other for around a month at this point, but I don’t doubt the depth of their feelings for each other. It just feels right to me that they make this commitment to each other, especially after everything they’ve been through already. Sure, for some people this is probably a rather quick decision, but I actually know a few different couples in real life that were engaged within a couple months of knowing each other, married soon after, and they’ve been happily together for years. I’ve also known couples that took a few years of dating to make that commitment to each other and a couple years later their relationship has fallen apart. I think partnerships are all delightfully different in many ways, and similar in just a few. To try and compare one pairing’s progress with another one’s seems short-sighted. I just thought it was adorably ridiculous for them to get engaged while being held prisoner, and having a wall separating them. It is definitely an interesting proposal story, that’s for sure.

We get a couple of questions somewhat answered from the office heist there at the end of the book, but it also definitely brings up a lot more questions. I think considering that Uncle Robert has a natural-born ability, as did Carl, and Wendy, it definitely seems likely that Ezra’s mathematical genius is a special ability as well. I also feel like we’re just starting to scratch the surface when it comes to the Haricott’s and the Walden’s and all this colorworld and life force/energy sight information. So I’m really excited to continue reading and learn more about this world that we’ve just started to dive into.

All right, I look forward to hearing your thoughts on these final chapters in the comments. Feel free to pose your own questions for the rest of us participants as well. Seriously, I would love to answer any questions you could pose about what we’re reading.

Next week will start the questions on Teleworld by Rachel E Kelly, so I look forward to seeing you then! I’ll have an announcement post up later with the breakdown of chapters for the month of Teleworld reading and discussions.

Oh…and take a photo of you and your copy of any of the Colorworld series and post it on social media, tagging @colorworldbooks, and ask to join the ColorworldLive VIP group on Facebook. I’m also hosting a weekly Colorworld book video chat on Mondays from 7 pm – 9 pm Eastern time.