It is not even 8am (at the time I’m writing this, anyway) and I am already drained for the day. Mostly because I woke up with the thought that today would be a good day to go through all the books in my library and do a purge. As with a lot of us bookworms, I end up buying a lot of books. Some I buy from used bookstores, some I get really good deals on, etc., etc. Well, it is also a reality that sometimes I won’t actually get around to reading them. Or I read them and like them, but not enough to warrant keeping them on my shelves. That’s where unhauls come into play.

I’m not usually very good about weeding out my shelves. I get a sentimental attachment to most of my books and so getting rid of them hurts me. But I’ve also started to get realistic about the fact that I only have so much space for books. Yes, my fiance has been gracious enough to let me have a room in our apartment filled with bookshelves (well and our cosplay gear, and most of his leather and craft tools). But I can’t be selfish and start insisting on putting up more bookcases in every spare nook and cranny of the apartment.

So unhauls. This morning I went through all of my bookcases and pulled off the books that I’m just not going to read again or that I haven’t even thought of in a while. It ended up being 94 books. So later today I’m going to have to reorganize my shelves so they look all nice and neat again.

I came to the conclusion that I needed a book purge because I was starting to double stack my books and it was making my shelves look too sloppy for me.

Okay, let’s just jump into everything I’m getting rid of. Oh, and if one of your absolute favorite books ever is in this unhaul, please know that it is awesome that you loved the book(s), and I hope you can accept that my opinion might be different. Of course, I’m also liable to add the book back to my library with a well-rounded plea/argument.

Oh man, let’s just start off with ones that might anger some people. First off, most of my Shadowhunters books are in paperback, and seeing that the Lady Midnight paperback follows the same spine design, I’d rather have all of them in paperback. Then there’s the Throne of Glass series…honestly I enjoy the series, but I’m not really seeing any more re-reads in my future. Of course, I also do own most of them in e-book as well, so it’s not really like I’m getting rid of anything…except for the space they take up on my shelves. Carve the Mark was just okay, and I don’t really feel the desire to read the sequel/finale. All those Amelia Atwater-Rhodes books…I was obsessed with them in high school. That’s why I bought these omnibus editions from Book Outlet a couple years ago. But I haven’t even thought of reading them over again. So maybe it’s time I let them go. 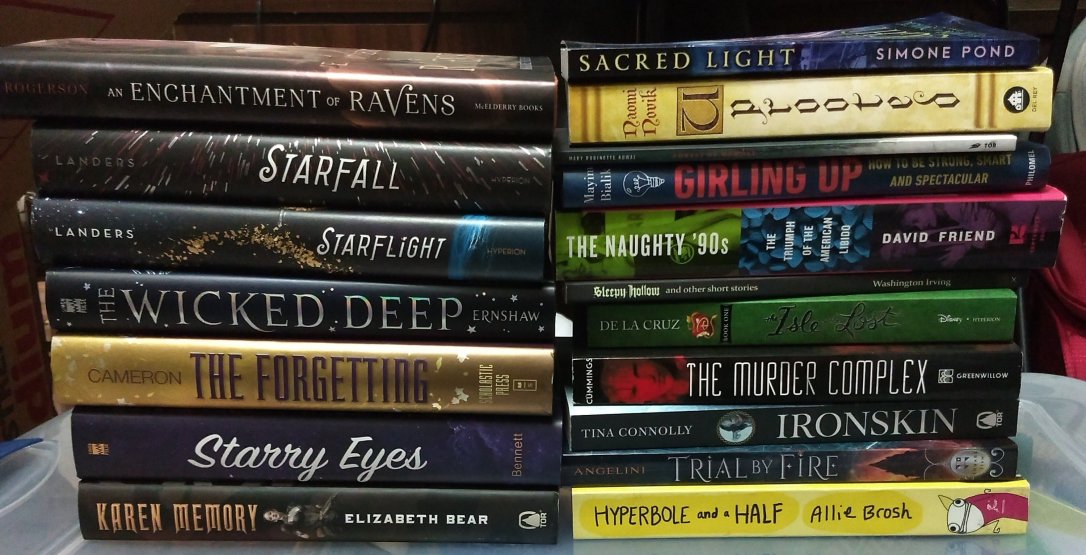 I’m just going to mention a few of these individually, because most of them fall under two categories: not going to reread, or just don’t think I’m going to get around to them. Uprooted is a book I plan to get in hardcover now, so it can match my copy of Spinning Silver. I’d rather have them sitting together in my library. Books I don’t plan to reread: An Enchantment of Ravens, The Wicked Deep, Starry Eyes, Sacred Light, Girling Up, Sleepy Hollow, Hyperbole and a Half. Everything else…well, I’m just probably not going to get around to reading them.

Do I need to read the official novelization for Wonder Woman? No, not so much. The Shattered Court…well the sequel was only released in e-book, and I like matching sets, so I guess I’m transitioning it to an e-series. The Midnighters trilogy was great, and another high school favorite, but I’m probably not going to reread them so they should go out into the world and find another home that will hopefully enjoy them. As for the others…probably not going to get around to them. I’ve tried to read Cold Magic two or three times and never made it that far into it.

Most of these fall into not going to re-read, or just probably not going to get around to. With The Alienist, Brooklyn, Every Day, and The Murder on the Orient Express, I’m honestly probably just going to watch them. I’m honestly a little sad about getting rid of The Lunar Chronicles, but I’ve had them on my shelves for a couple years now just hoping that I would feel like now was the time to finally read them, and the feeling has never come. So…if it does in the future, I will probably just borrow them from the library.

Yep, more books that I’m either not going to reread, or just probably won’t be getting around to. Won’t reread: Autoboyography, Save the Date, Talking as Fast as I Can, Royal Bastards, Love Hate and Other Filters, The Fandom, The Brightsiders, Hollow Earth.

Sometimes it’s difficult to accept the fact that we only have so much free time to dedicate to reading. It is true that I generally read around 130-150 books each year, but that still doesn’t get me any closer to reading everything I would like to. I think I would have to double my reading to do that, and I just don’t have that kind of time in my life. This is where we readers like to wish that we could just get paid to read and review books.

But there we go. Oh, and before I sign off for the day, please head over to this post and ask myself and my fiance questions. We’d like to do a get to know you Q&A this weekend, and that is much easier to do if you actually have questions to answer. Or, you know, ask your questions in the comments for this post. That’s fine too.

That’s all for today and I’ll be back soon with more bookish content.

11 thoughts on “Embracing the Unhaul”